In today’s episode, Dara will explain how to use the idiom – when hell freezes over.

This idiom is similar to another common expression you may have heard before – when pigs fly. For example, “John will get an A on his exam when pigs fly!”

Can pigs fly? No! Of course not. This idiom is used to describe an impossibility, or something so ridiculous that it is never going to happen. John is a poor student, so he is very unlikely to achieve an A grade on his exam. Of course, in reality, John might do well if he studies hard enough, but his poor behavior in the past has led the speaker to this conclusion.

Watch the video below to see how to use today’s expression.

To freeze over means to turn into ice, but when we think of hell, we think of a place which is eternally on fire, right?

Let’s clear this up with a few examples:

So, there we are. Can you use this phrase in a sentence of your own? Let us know in the comments section below or visit our Facebook page.

You may have noticed from Dara’s examples above that this expression is more often used when you feel a little angry or annoyed about something.

Keep learning and impress your English teacher or examiner with more Everyday Idioms. 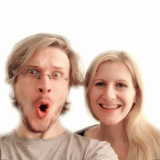